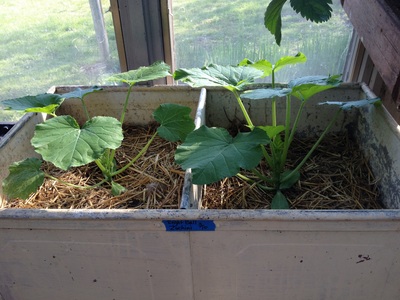 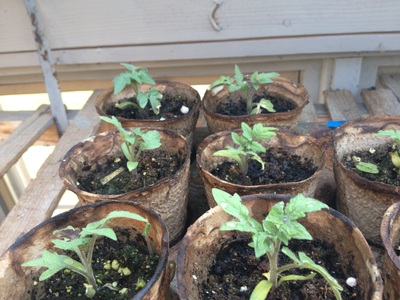 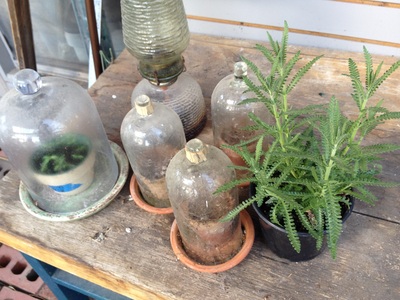 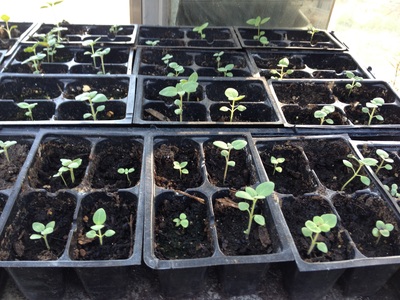 A greenhouse is a wonderful thing!  Mine gets a lot of use, mainly due to our crazy Ozark temperatures.  It serves as a shelter for cuttings and seedlings, as a space to over-winter tender plants, and even has a small seating area for use as a sun room.
We built our greenhouse from recycled resort windows and reclaimed deck lumber, and it has a creek gravel and salvaged brick floor.  We added a barrel stove for heat during extremely cold weather, and a rain barrel catches runoff which I use to water the plants.  Outside, cold-frames topped with old windows hug the length of the exterior, and serve as a season extender for young plants and holding place for mature ones.   The wall behind the cold-frames serves as a trellis for vining crops, and in late summer the greenhouse is almost completely camouflaged by the vigorous plants.  It's a favorite spot for me, and quite the sight to see! 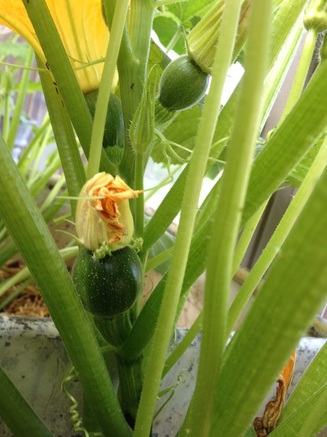 I'm a sucker for oddball plants.  A few years ago I was given a dusty old box of seed packets that a friend found in an abandoned house.  He immediately thought of me when he spied it....It's nice to have friends.  Surprisingly, the seeds were not heirlooms, but mostly hybrids.  And of course, they were expired.  But that didn't faze me, what drew my attention was the plethora of unique seed varieties in the box.  Like this oddball Eightball Zucchini.  I grew it last year for the first time, and to my surprise, it did exactly what it was supposed to do--grow a zucchini that looked like an eightball.  It even had a white circle with an 8 in the middle!  Just kidding.  But you never know about hybrids these days.... Truthfully, it was a nice little compact plant with perfectly round zucchinis on it.  I found them cute and very tasty, so this year I grew it again.  This time I planted it in my old washer tub inside the greenhouse.  I wasn't sure what to expect, since I don't normally have anything growing inside during the summer--too hot in there.   To my delight, it flourished, flowered, and even fruited.  I guess those pollinating insects found their way inside just fine.  Probably because I left the doors wide open.  The only curious thing that happened was that the normally compact plant started to vine.  I figured it was overwhelmed with the heat and was making a desperate attempt to escape.  If that was the case, it was unsuccessful.  The door was      at least 15ft away, and it never would have made it.  But it did create a beautiful effect--this brilliantly green leafy vine dotted with big yellow blossoms and neat little round zucchinis, cascading up and over the side of the washtub.  I was so pleased that I didn't even care if I got to eat anything off it.  But I did, and it was delicious.  Despite it's hybrid background.  It helped that it came out of an abandoned house...I'm a sucker for old homesteads!  And oddball plants. 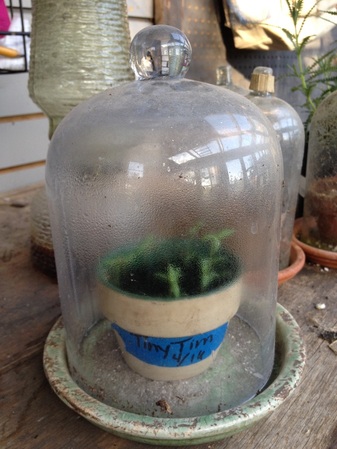 I started my tomato seeds in the greenhouse several weeks ago, but the other day I ran across a packet of Tiny Tim Tomato seeds that I had forgotten all about.  Darn it!  I do that a lot.  So much so that I've come up with a solution.  Here's how it goes...I run to the greenhouse, grab a small pot, fill it with seed starting mix, water it down, and stick the seeds in it.  Then I reach for the most important part--my mini terrarium.  I put the pot on the saucer and plop the glass dome over it, and then...wall-ah!  Instant seedlings!  Okay, maybe
I'm stretching a bit.  But it seems like it happens that fast.  There's something about having a pot inside a terrarium inside a greenhouse that causes the seeds to sprout at almost the speed of light!  There is a catch, though.  The timing has to be right.  This won't work in the winter, only in spring and early summer.  It has to be warm enough to heat the soil to the right temperature
for sprouting, and the day length needs to be a certain amount in order to trigger growth.  It just so happens that spring and early summer are the times that I need to use this technique, so the timing is usually right for me.  Once the seedlings have sprouted and had a few days to sturdy up, I can transplant them into larger containers.  Within a week or two I can't even tell the difference between them and the others that I remembered to plant at the right time!  Whew...that's a relief.  I'd hate to do without my Tiny Tims this year! 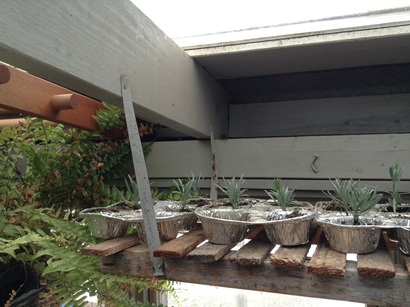 Lavender doesn't grow well from seed for me.  But it's one of my favorite herbs, and I want to plant more every year.  I've solved this problem by rooting lavender cuttings.  In late summer I grab a pair of clippers, fill a small bucket with water and head off toward the lavender patch.  I find a young pliable stalk and clip off the top 3-4 inches.  I immediately plunge the cutting in the bucket of water and keep it there until the bucket is full.  Then I take it into the greenhouse where I dip the wet stalk ends in rooting hormone before sticking them in shallow trays filled with sandy soil.  In the photo I've used disposable muffin tins.  I place these cuttings on the upper shelves in the greenhouse, and they stay right there through the winter.  As long as they're kept moist, they'll develop roots and be ready for planting by Spring. This has been a great way for me to expand my lavender patches without the frustration of starting them from seeds.  And the best part is that it's inexpensive! 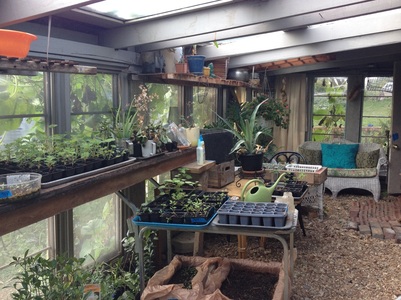 My greenhouse is not just a growing space, it's a living and working space, too.  I have it divided into different areas, each with it's own function.  Just inside the door is my seating area where I can relax during a cold spell or a rainstorm.  And past the seating area is bamboo work table with cafe chairs where I sit and play with the plants.  Snug up against the windows is a long, tall tray table where I put all the seedlings once they're transplanted, and right above that are hanging shelves made from slat boards where I keep tender perennials.  Across from the windows there's a pegboard wall and a barrel stove.  On the far wall opposite the seating area is an old dresser painted peacock blue that I use for storage, and a shelf for my collection of clay pots.  The peacock pen borders this wall, and I usually find them gazing longingly through the windows at the greenery inside.  I don't blame them--it's an oasis in the middle of winter, and a great place to work, play, and relax! 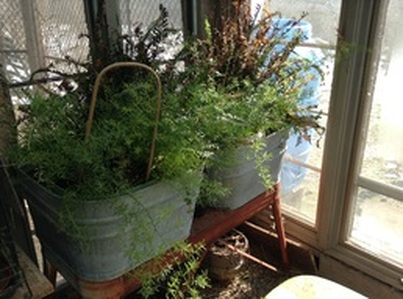 The greenhouse is a great place to overwinter many of my plants, like these ferns.  As long as the temperature inside the greenhouse stays above 28 degrees Fahrenheit, the plants don't freeze.  If the temperature does drop below that point, I have a wood burning stove that I can use to warm the place.  But I use the stove as a last resort, and I've implemented some other techniques to retain heat naturally.  The idea is to absorb warmth from sunlight during the day and release it at night.  The color black does this, and so does clay, brick, and rock.   The greenhouse floor is gravel, which was absorbing some heat already.  But, I wanted better results, so I started paving it over with salvaged bricks to add some extra absorption power.  Then, I painted the back pegboard wall black, and I moved my collection of clay pots inside the greenhouse.  So far so good!  I'm always on the lookout for other energy saving techniques I can try--every little bit helps, and even though it's not a sauna in there during the winter, I rarely have a plant freeze to death!
Powered by