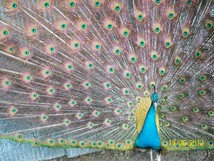 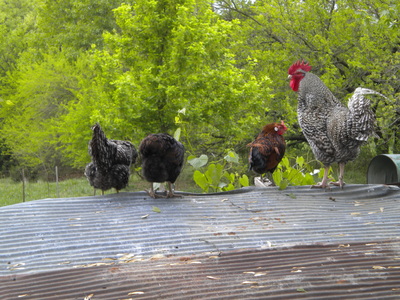 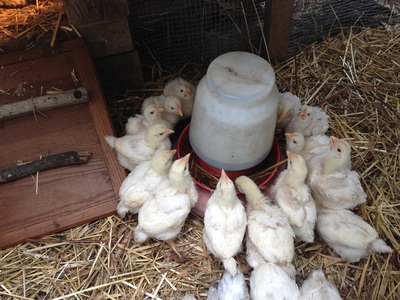 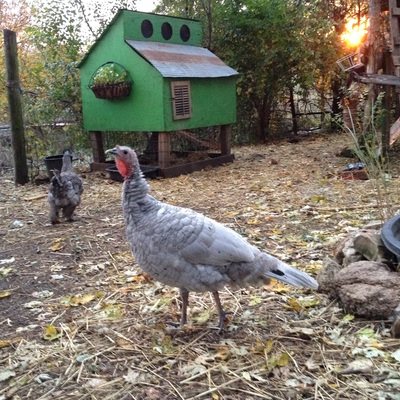 I love farm animals.  There are plenty of good reasons for this: they provide food, income, fertilizer, pest and weed control...they can even till my garden for me!   But what I really love is having odd farm animals just wandering around.  I like to just sit and watch them happily scratch, root, or strut about--doing whatever comes natural to them.  Sometimes it gets a little crazy, but they're such a big part of the homestead equation, I can't imagine not having them. 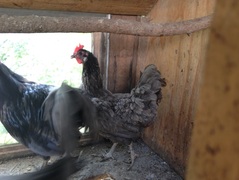 One of the rarest breed of chickens on the homestead is the Isbar (ice-bar).  This breed hails from Sweden and was developed in the 1950's by a catholic monk.  They've only been available in the United States since 2011, brought in by Greenfire Farms in Florida.  The birds are a smaller breed, but larger than a bantam.  The most coveted feather color is called "blue", which is in reality a shade of slate-gray.  Our birds are Blue and Splash (white with large gray specks).  They love to free-range and are quiet birds, although sometimes a bit skittish.  The hens lay a beautiful green egg, and on my farm, are very broody.  They seem to have a special bond with their chicks, too.  I've often found their offspring nesting right along with the mother even after maturity.  Our Isbar flock is small right now, but that won't be the case for long if the broody mothers keep on hatching chicks.  We'd like to eventually make some fertile eggs available to other rare-breed chicken lovers, too.  That's further down the road for us, but right now we simply enjoy having this very rare breed roaming around the barnyard. 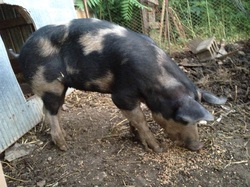 Hogs are a great animal to have on the homestead.  Young hogs are referred to as pigs, and babies are called piglets.  We usually raise one or two pigs a year because they are so useful to us.  They provide natural pork, fertilizer for the compost piles, and even some manpower--or pigpower in this case.   Homesteaders of long ago knew all this, and so they used their hogs wisely.  They didn't have the benefit of the modern machinery we know today, so when they needed to clear an overgrown area, break up the soil, or even pack down a seeping pond, they'd just send in the hogs.  The hogs would do what they do best--root around.  Hogs love to eat grubs, roots, and other treats hidden deep in the soil, and they will stop at nothing to find them.  This can be disastrous if they decide to root for grubs in the garden, but it can really come in handy in the right situation.   Using an animal's natural instincts to get my work done is right up my alley, and they're always happy to lend a helping hand--or hoof.  Cloven hoof in this case.  Actually, their snouts are the most helpful part of their anatomy.  They use them like shovels to dig out their snacks.  I've gotten distracted again, haven't I?  Back to my story...This past winter I put a piglet in a moveable "chicken tractor", and I used her to clear a large area full of grass clumps and compacted soil.  I just moved her around every so often, gave her some supplemental feed, and made sure she had plenty of water.  By springtime the grass was cleared, the soil was turned over, and the grubs were gone.  It sure saved me a lot of work, and it gave her something useful to do all winter.   I love it when a plan comes together! 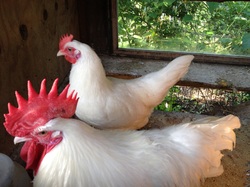 By now you probably have realized that I have a bit of a chicken obsession.  I raise several breeds of chickens, and I can't seem to stop adding more.  I've recently become fascinated with a rare meatbird called American Bresse (rhymes with dress).  The Bresse chicken hails from eastern France and is considered by food connoisseurs to be the most exquisite tasting chicken in the world.  They have become a French (and American, now) patriotic symbol due to their bright red combs, strikingly white feathers, and slate blue feet.  France is so proud of them that they have placed them under protective law and very few are available outside of their native region.  However, there are a few flocks that have recently made it to the United States.  They were renamed American Bresse to distinguish them from the French line, and I've managed to get my hands on a pair of them.  My plan is to build a flock and eventually use them as my main line of meatbirds.  I'll be able to raise them humanely, allowing them to free-range, eat from the garden, and drink from the rain barrels.  I even plan to grow some crops specifically to feed them!  I can't wait to see how it all turns out.  I'm still quite a ways from seeing all this come into fruition, but a girl can dream.  I'll let you know how it goes. 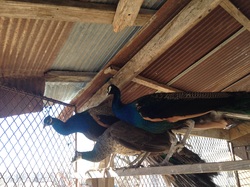 The most beautiful creatures here on our homestead have to be the peafowl.  Their exotic coloring and fancy feather patterns will take your breath away, especially when one of the males decides to strut his stuff.  Peafowl have a tendency to be more aloof than the other farm animals, but that's just fine with me.  I got them because I wanted to add another element of beauty to our homestead, and they certainly do that as they roam elegantly throughout the gardens.  Right now though, they are in their pen.  Peter, our oldest and first peacock, got lonely all by himself during mating season and decided to wander into town.  I kept telling him there were no pretty peahens to be found in our tiny town of 200 people, but since our farm sits just at the edge of town, he couldn't resist cruising on in to see for himself.  After someone dropped him off for the fifth time, he went on lock-down.  Then we found him a girlfriend, Mary, and let them get to know each other for a while.  Finally came the day when I accidentally bought another peacock, Paul, at an auction.  He went into the pen, too, and they've all adjusted just fine (see my blog post 11/14/13 for more on them).  This spring I plan to turn them all out, and let's hope they are content enough here on our twelve acres that they won't have to go to town.  I don't think the townspeople care much for those squawking 5 AM mating calls... 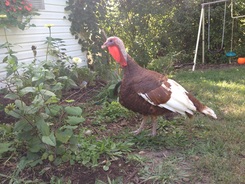 I tend to gravitate toward heirloom anything, and that includes animals.  Bourbon Red Turkeys fall into this category.  They came out of the Kentucky Bluegrass Region known as Bourbon County in the late 1800's and are known for their rich flavor.  Yes, we eat our turkeys.  But until that time comes, they're free to roam the property, gobbling up grass-hoppers, worms, and any other critter that crossed their paths.   They wander through my gardens and fields, as natural as can be--although graceful wouldn't be the best way to describe them.  They tend to be somewhat awkward, and they certainly forget their manners come feeding time.  Despite that, they live the good life for as long as they're here.  Which is my goal for all the animals on our homestead--and for me and my family, too!

The Chicken or the Egg 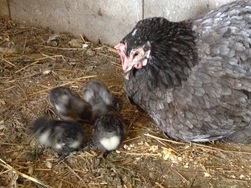 Farm fresh eggs are a must on our homestead, and to get fresh eggs you have to have chickens.  I have quite the collection of chickens roosting in my coops, but each one is there for one specific reason--egg color.  Yes, I pick my chickens based on the color of egg they lay.  My Americauna eggs are blue, my Isbar eggs are green, my Lavender Orpington eggs are pink, my Barnevelder eggs are chocolate brown,  my French Marans eggs are coffee colored, and my American Bresse eggs are creamy white. It's important to say that the color of the egg doesn't change the flavor, but it sure makes for a pretty nest of eggs. One of the most satisfying chores I do each day is gather these eggs, and when I reach into the nest box I can easily tell who was up early and in laying mode by the colors of the eggs I find.  I also know who to keep an eye on if I don't get a certain color for a few days.  Sometimes I'll notice a hen hovering over a nest full of eggs or nestled down in the same nest for a few days straight.  This usually means she's gone broody, and depending on the time of year, I sometimes let her go ahead and hatch them out.  It means I won't get a pretty egg from her for a few weeks, but the fun we have watching little chicks scurrying around more than makes up for it.   Oh what a joy it is to raise chickens.  I must confess, chickens are my absolute favorite farm animal.   But shush! Don't spread it around.  I'd hate for any of the other animals to hear me say that.
Powered by